The 18th edition of the wiring regulations requires most circuits in a domestic property to be protected by a RCBO or Residual Current Device (“RCD”). An RCD is a life saving device which is designed to prevent you from getting a fatal electric shock if you touch something live, such as a bare wire. It can also provide some protection against electrical fires.

What is a consumer unit?

A Main Switch – this does not act as a safety device and is just there to manually turn off the power to your home.

An RCBO for each circuit – Instead of old rewirable fuses, you now have RCBOs (Residual Current Breaker with Over-Current), basically a switch which automatically switches itself off when it detects that the circuit has overcurrent, i.e. a 6amp RCBO will switch off when it detects anything over 6 amps on its circuit. No rewiring of the fuse is needed, when the fault has cleared, you simply switch it back on.

RCBOs are much more reliable, easier to use and safer than old rewirable fuses. It is not unknown for old rewirable fuses and their fuseboards to set on fire or explode, spitting out molten copper and tin, when certain types of extreme faults occur.

What is an Residual Current Breaker with Over-Current?

RCBOs do not detect whether a circuit is overloaded or not, rather it detects the integrity of the circuit. If there is damage to a cable, compromise as a result of water or a faulty appliance, an electrical current will flow where it shouldn’t and could cause an electric shock before the circuit is overloaded. Consequently an MCB does not always offer complete protection. By detecting even the most minute fault currents and having a split second disconnection time, RCBOs protect from electric shocks, or at the very minimum, injury from electric shock.

When is an RCBO required?

New requirements set in the 18th edition regulations state that there should be RCD protection for sockets, the electrics in your bathroom or shower room, circuits intended to supply mobile equipment outdoors and for cables buried in walls. Since the wiring in most of the homes up and down the country runs underneath the plaster of the walls, it means every circuit in your home should be RCD protected.

Reasons to have your consumer unit replaced

Replacing your consumer unit improves the standard of safety in your home and protects you and/or your family.

If you ever have electrical work carried out in your home such as having new lighting, shower or socket circuits, and you don’t want to have new consumer unit when it is needed, the electrician will have to install a separate smaller consumer unit so that the newly installed work meets current regulations. Not only will this make the job relatively expensive, it will lead to you having multiple consumer units in your home and the possibility of having to pay for further smaller consumer units in the future. It is normally preferable to have a new consumer unit installed at the earliest opportunity, i.e. when having an electric shower installed or having a new kitchen fitted, and one that incorporates all the circuits in your home and also has a little space left to add more circuits in the future if you ever decide to have more electrical work done.. 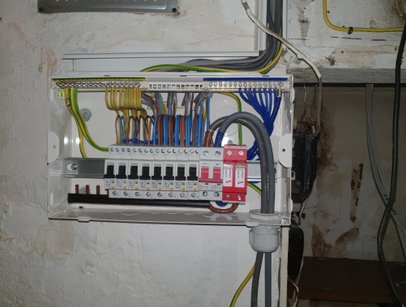